Sorry folks! I have not been to the blog spot in awhile! I still have not finished the salt kiln, but instead, I have been working on a very important project. I have photo documented a day in the process of this project. The pictures below are pictures of me raku firing, a fascinating approach to firing pottery. Keep reading!
the raku kiln 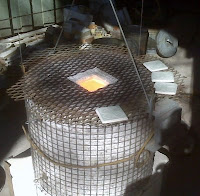 the kiln open with coasters inside 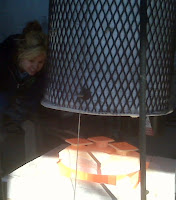 removing the coasters from the kiln 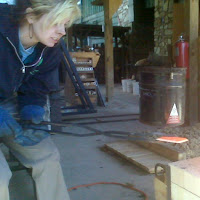 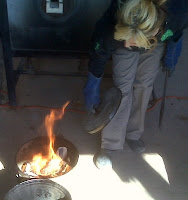 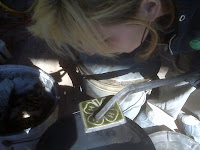 For the last few months I have been working on a project for the West District 4-H Leaders Association. I was commissioned to make coasters to be given out at the NC Volunteers Leaders Association Conference. I fired them by a process called Raku. This in an ancient traditional Japanese means of firing. For more information on this process and its fascinating history see http://en.wikipedia.org/wiki/Raku_ware
To begin, the pots, or in this case, the tiles, are made, allowed to dry, and bisque fired in an electric kiln to about 1650F degrees. The clay is now hard enough to handle, but still porous. I am ready to apply the glaze. Each piece is hand decorated. My approach to decoration is to mask off the design. I use pinstriping tape (for automobiles!). I brush the glaze over top of the design and anywhere I want the glaze to appear. Once the glaze dries, I remove the tape from the pot and the negative shapes create a pattern; in this case, the clover, the symbol of 4-H worldwide.
Now I am ready to fire. Each piece is fired individually in a small kiln called a raku kiln. The first picture is of the raku kiln with the coasters on top waiting to be fired. Notice the orange glow of the atmosphere inside. There are three to five coasters firing at once. It takes about 45 minutes for the the kiln to reach a temperature. The kiln is rigged on a pulley system to make it easier to raise the basket and retrieve the coasters from inside. Once the kiln reaches 1850F and while the coaster is still red hot, I pull them, one at a time, from the kiln using long tongs and fireproof gloves. The coaster is then transferred to a metal trashcan. The trashcan is packed with newspaper, a combustible material. Once the coaster is placed in the trashcan, the newspapers instantly burst into flames. I place more newspapers on top of the coaster and replace the lid. This process creates heavy smoke and an atmosphere void of oxygen. This atmosphere, called "reduction", creates the natural black color of the claybody.
The glazes I use are called crackle glazes. After a few moments, I use the tongs to pull the coaster back out of the trashcan. I bring the coaster close to my face and blow on it and I can hear the crackling and pinging of the glaze while the crackle effect is being achieved. I place the coaster back in the trashcan, again loaded with newspaper and wait for the paper to ignite. I replace the lid. Sometimes I repeat this process up to three times depending on how much crackling I would like to have on a certain piece. Meanwhile I have more coasters in the kiln slowly warming in the kiln, waiting for their turn. Then the process starts again!
Thanks for reading. Come back and visit soon!
I hope to have the salt/soda kiln finished before Spring.
Posted by Trista Hudzik Pottery at 5:19 PM

Promote Your Page Too 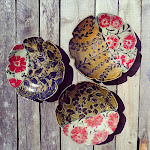 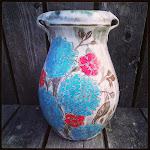 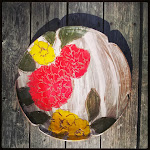 "I make therefore I am." -Sandy Brown

"To work with clay is to be in touch with the taproot of life.'' ~Shoji Hamada

"The hand leads to the mind..." -Suze Lindsay

"Garth Clark wrote somewhere that with paintings and sculpture you can bring an observer into personal space but that only a cup taken into the mouth brings the art into intimate space. I enjoy this aspect of being a potter the most."

Trista Hudzik Pottery
Asheville, North Carolina
Artist and Potter. Treehugger and Lover of Dirt. I make handmade pottery, mostly for the table, influenced by traditional North Carolina pottery and my fascination with folk art, vintage floral prints and antique table ware. This blog is to document my adventures as a potter.

People Who Inspire Me & Their Blogs